In this solo dining adventure, Gary checks out The Counter, a California-based burger chain making their first move into the crowded New York City burger scene. 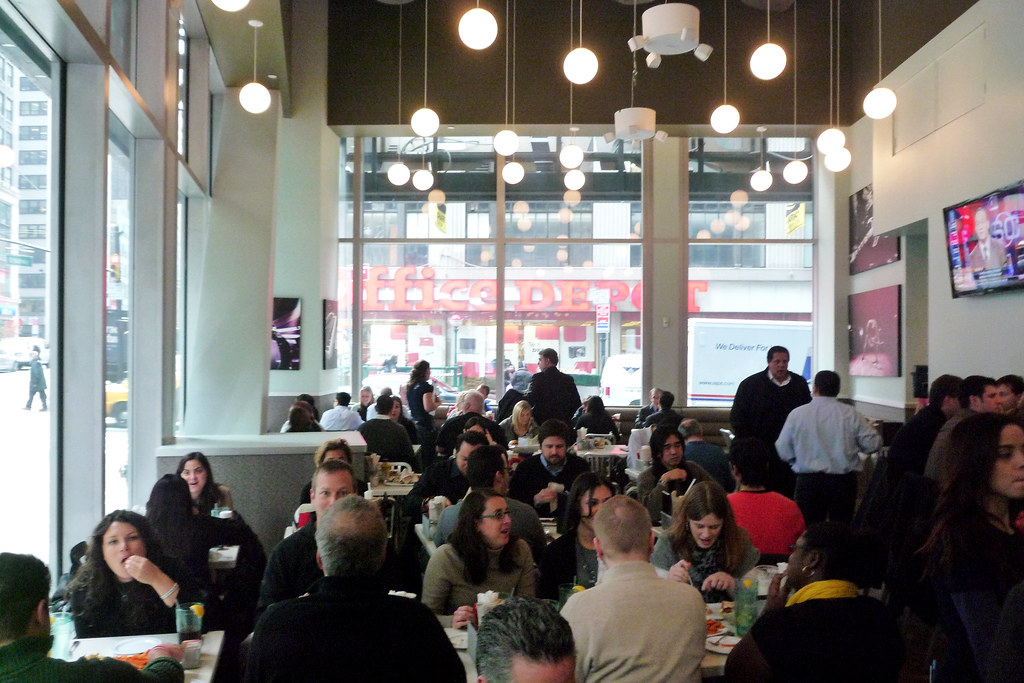 Only two weeks into the new year and already a second burger joint post? Yup, this burger craze ain’t dying anytime soon. I’d actually visited The Counter before when they threw a pre-opening party a few weeks ago. It wasn’t a really good representation of what they would be like when they actually did open to the public – they only had sliders so the burger customization they pride themselves on wouldn’t be on display at the time. Still, I left the party thinking the sliders had a nice beefy flavor and the fries were fried perfectly crisp. I looked forward to returning for a meal here.

I tackled this place with my buddy Won, who works nearby and has eaten through his fair share of burgers in the Times Square area. We arrived here at 11:45 am on a midweek work day. A good thing because it wouldn’t take long before the place was filled up – by 12:05, it had gone from maybe 15% full when we walked in to just about every seat being filled. It’s practically a testament to the continued endurance of the burger’s popularity that with all these burger options nearby, they all manage to be busy just about every weekday lunch rush. 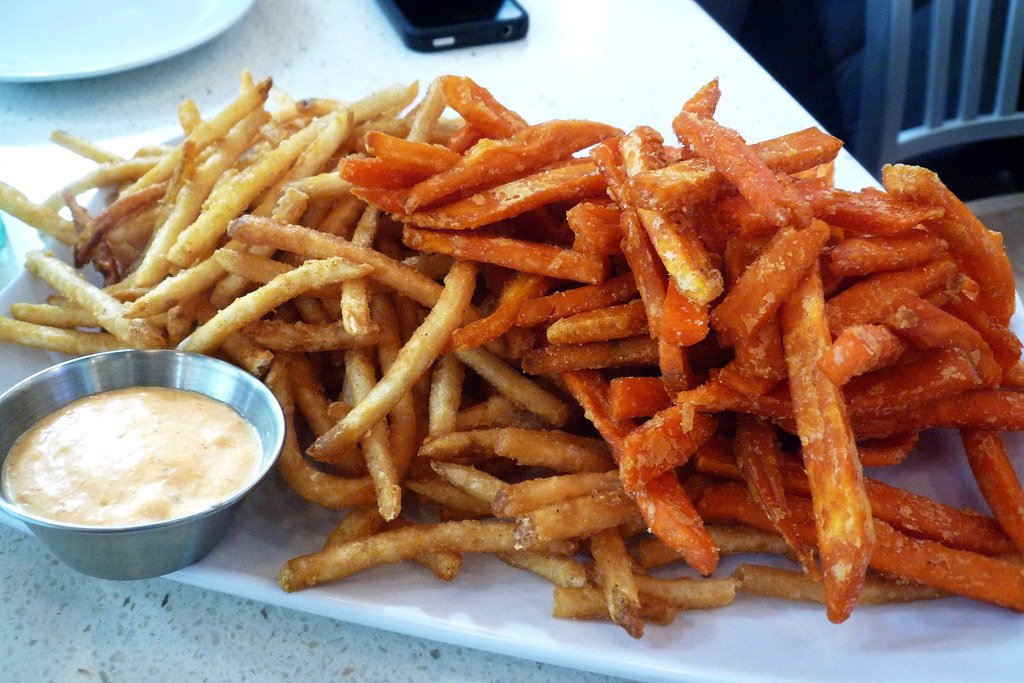 We put our order in for a burger each and a plate of fries at the same time but the fries would come out eight minutes before the burgers. I thought that was a bit weird since I’m more accustomed to them coming out with a burger, not well before it. Hungry people can’t complain so we certainly didn’t, happily nibbling on our plate of fries, half of which were regular fries and the other sweet potato fries. The regular potato fries were nice and crispy, just as I remembered them being during the pre-opening party but, sadly, these weren’t seasoned (okay, salted) as well. The sweet potato fries weren’t as crispy but that’s in line with what I expected from this sort of fries. 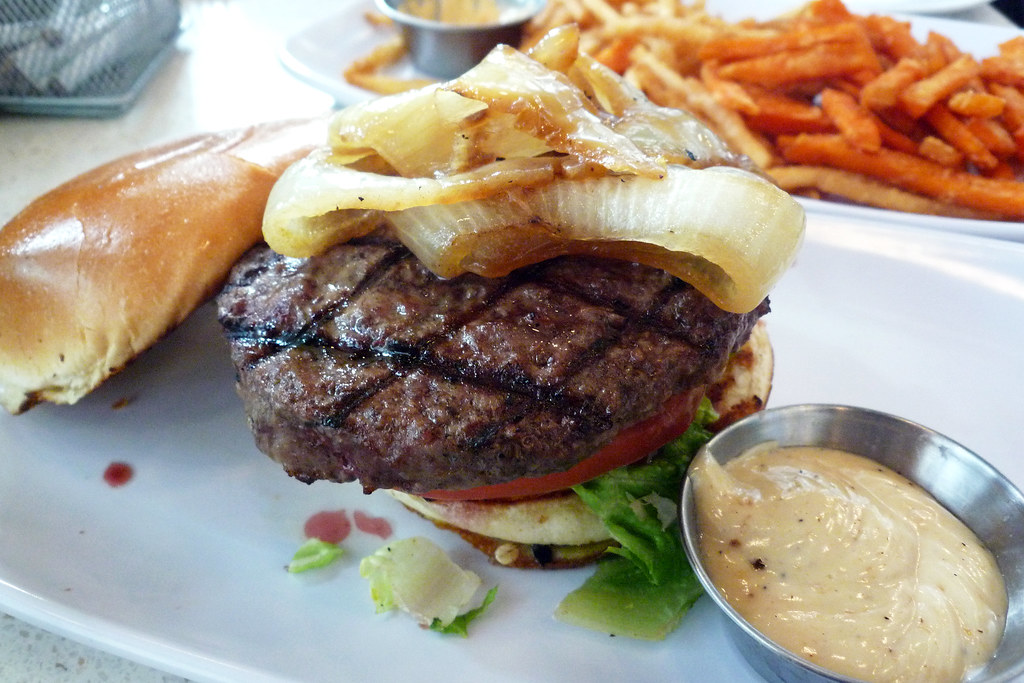 Then came the burgers – I had the ⅓-pound burger with lettuce blend, tomato, pickles, and grilled onions, with a roasted garlic aioli on the side. The burger comes as pictured above, with the top bun on the side so you can see the well-defined grill marks, and nicely caramelized grilled onions. After spreading the aioli onto the top bun, I placed it back atop the burger and cut it in half… 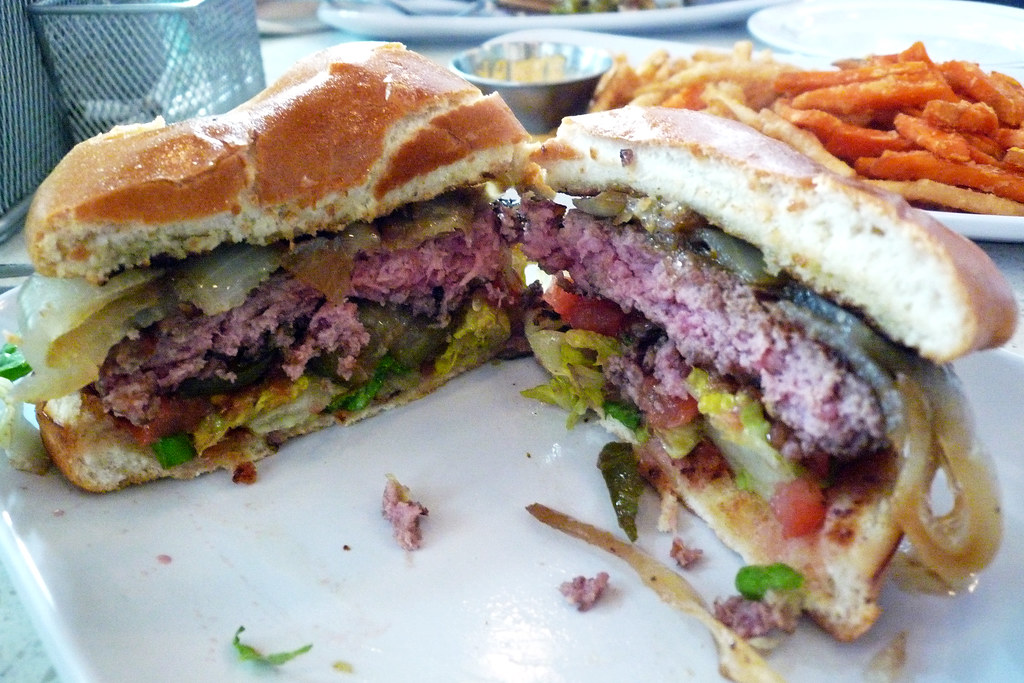 … which revealed an interior that was cooked closer to medium than the medium-rare I had requested. That, in turn, kept the burger from being as juicy as I would prefer. Actually, outside of the roasted garlic aioli, I was hard pressed to really find any flavor to the burger that stood out. As I closed in on finishing the burger, I ended up using a fork to eat the remaining meat which led to my discovering a resilient elasticity to the beef as it didn’t break apart when I inserted the fork and applied a little force. I don’t like a burger that’s a crumbly mess but I’m not so sure I should be able to hold my burger up with a fork like it were a lollipop.

So the burger at The Counter – I won’t go as far as to say it’s a “run of the mill diner burger” or that it was as though “they receive pre-formed frozen burger patties” like Won did. I will agree with him when he says that “the patty was over cooked and didn’t have that nice texture of a freshly ground and hand formed burger.” Ultimately it’s a decent burger and that’s about all I can really muster up to describe it. It’s certainly not bad but it’s just so blatantly mediocre, that it might as well be.