In this solo dining adventure, Gary is taken out to Momofuku Má Pêche for his birthday – he has some wonderful friends. 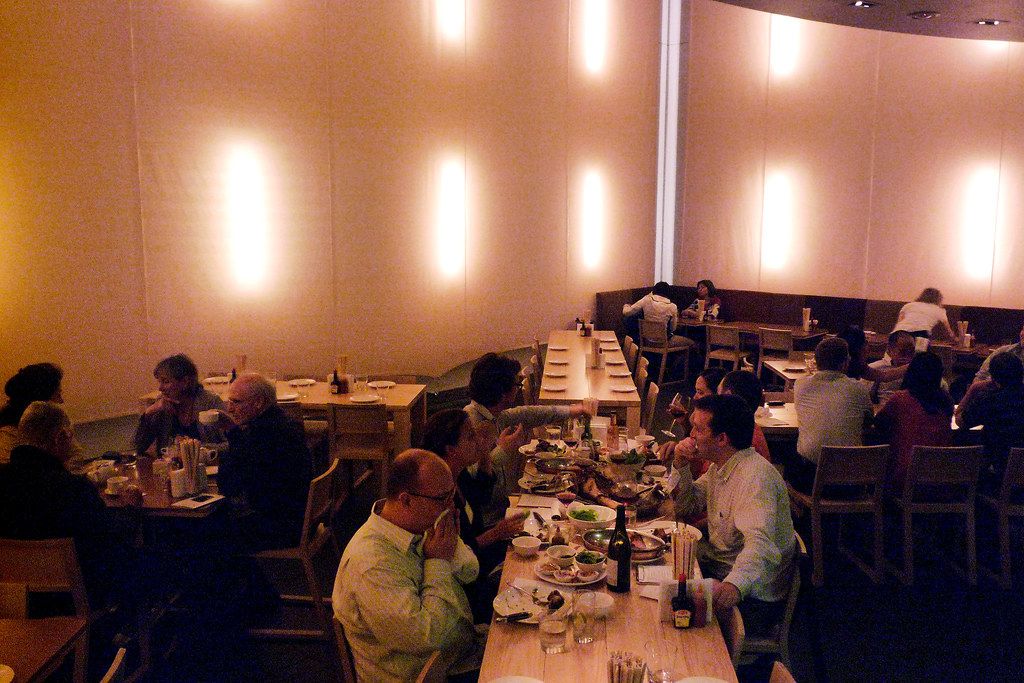 I am blessed to have some really good friends in my life. Just about every year for the better part of the last decade, my friends Susan and Cee (sisters) have taken me out to a nice dinner for my birthday. Dinner the last few years had been at Blue Ribbon Sushi, a place that I absolutely love – great sushi at a great location. This year, for a change of scenery, I wanted some place new, some place I’d never been. Momofuku Má Pêche, the latest restaurant in David Chang’s burgeoning portfolio, was an easy choice.

I should actually clarify something I mentioned in the last paragraph – this visit for my birthday dinner would not be the first time I’d been to Má Pêche. In fact, it wouldn’t even be my second time. I’d actually been there twice before when they were just serving a limited menu in the mezzanine of the Chambers Hotel, whose first floor and basement the current restaurant would eventually occupy. That limited menu included a lunch special which was $10 for a bánh mì and soda – a bit pricey, yes, but it was a top notch sandwich. It wasn’t something I’d want to frequent too often because it’s basically an $8 sandwich but something worth getting every now and then. Actually, come to think of it, that’s pretty much my stance on the entire Momofuku chain – great stuff but pricey enough to make it a sometimes, not regular, thing.

What can be said about this particular Momofuku restaurant, Má Pêche, is that it’s a really good place for a special dinner. Like, say a birthday. As long as you don’t mind the somewhat bland beige decor. After Noodle Bar, Ssäm, and Ko (in the original Noodle Bar space), all locations that had really nice interiors, this one just feels off. There’s a main wall that extends from the basement all the way through the first floor which is nice and makes the space seem larger. Unfortunately, the lack of windows along this wall coupled with the dim lighting just reminds you that you are, indeed, dining in a basement. Still, if the food is good, all this hardly matters. Which is a good thing because the food here is indeed good. 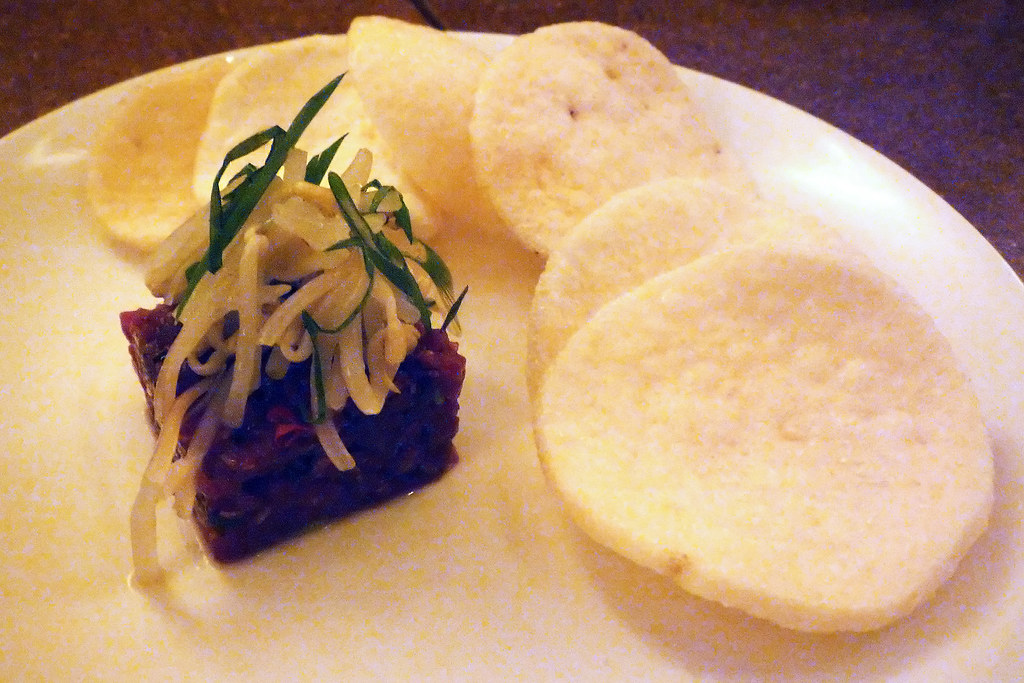 One of the first two of our four dishes from the petite assiette portion of the menu was the beef tartare. It was spiced and sauced well but, more importantly, there was a nice solid consistency where the little pearls of beef came off easily but never became mushy. The shrimp crackers provided a nice landing spot for the beef. 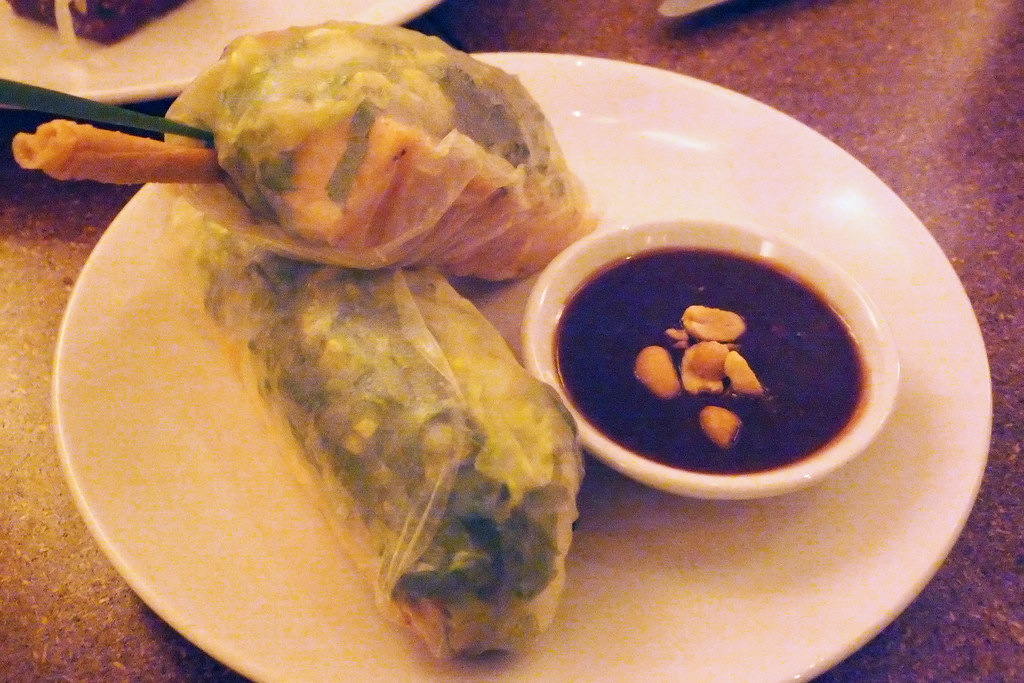 Arriving at the same time as the beef tartare were the shrimp summer rolls. They’re good summer rolls and I like the use of minced shrimp paste since they obviously cut some fat into it but they’re goddamned summer rolls – ain’t much that hasn’t been done with them. 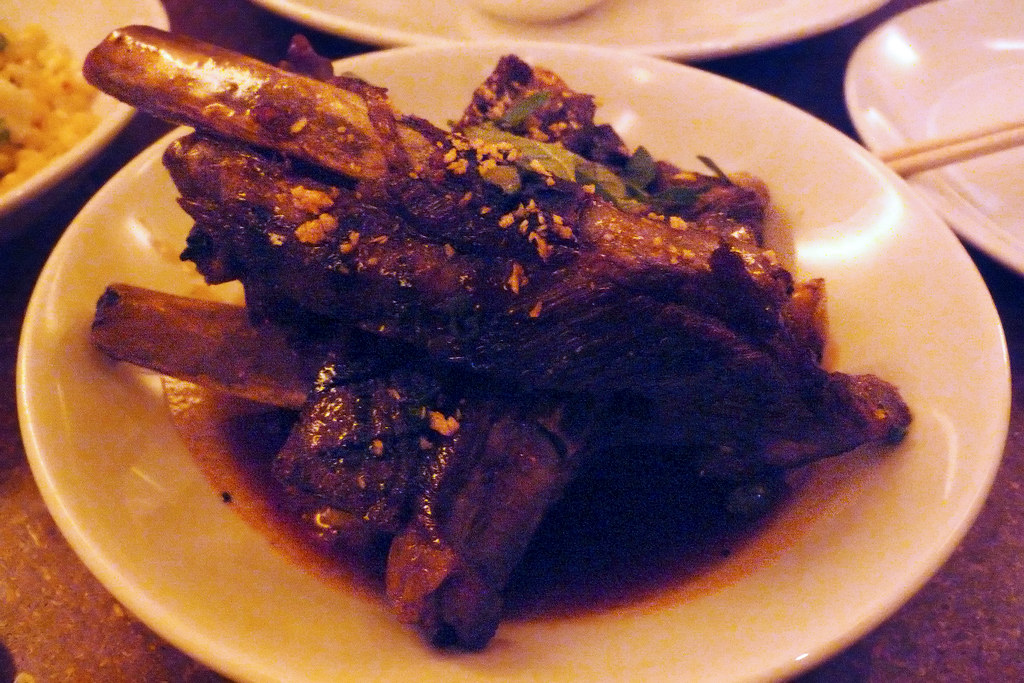 Next up were our two cooked petite assiette dishes. One were the pork ribs – four to an order and they were pretty meaty. They were cooked until they were very tender, juicy, and falling off the bone. The sauce was very sweet – good but may be too sweet for some. Eat these while they’re still warm because the sauce can get really sticky and sweet when it cools off. 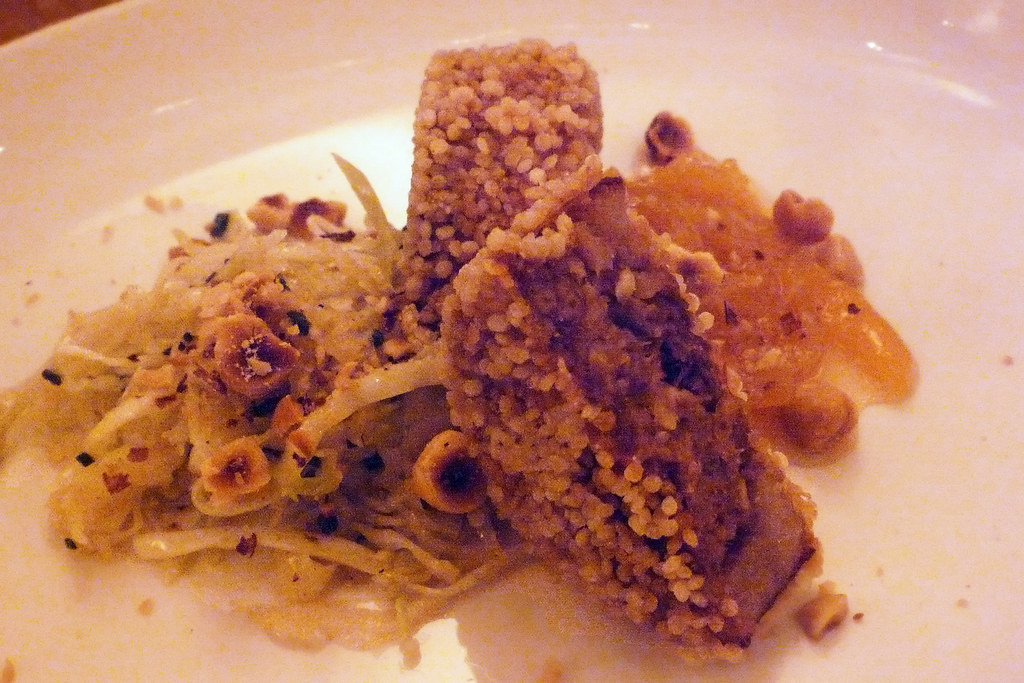 Our last selection from the petite assiette section of the menu were the crispy pig’s head – a thick puck of pork and fat, battered and then fried to perfection. I loved this dish which was a good thing because my dining companions had no interest in eating it aside from a quick sampling of it. Yeah, I ate this all by myself. I rock. The cabbage slaw and the sweet peach strips on the side were a nice and refreshing – it did the job at cutting the fat from the pig’s head. 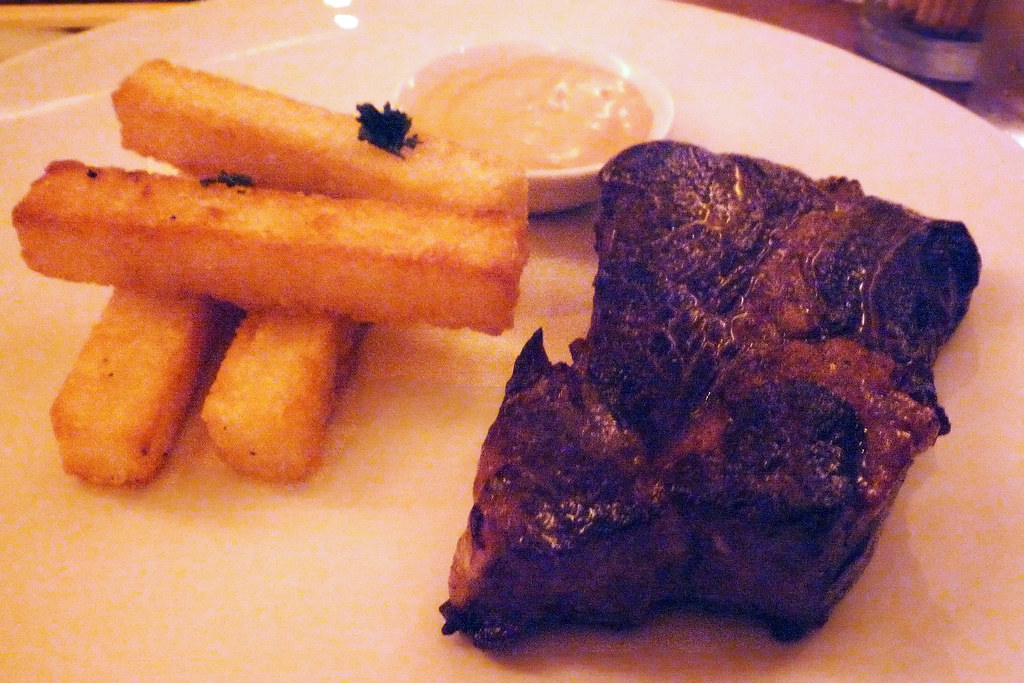 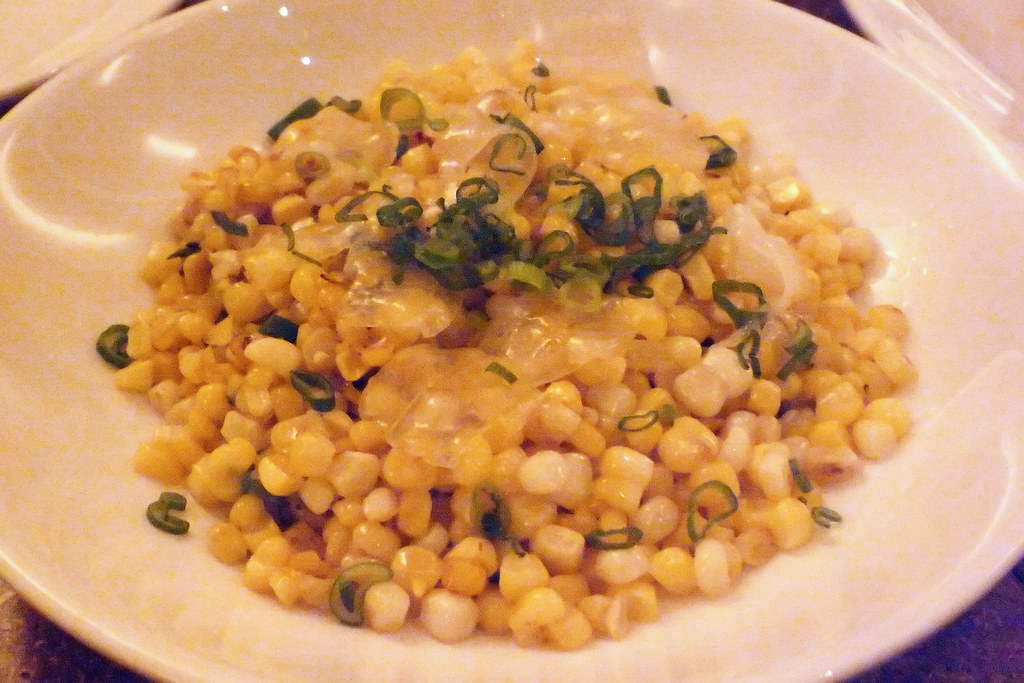 To finish our meal off, we chose the steak frites from the poisson & viande section of the menu and the corn from the légumes section. The steak here is a 12 oz juliet cut – no idea what that is but it might as well mean “fatty as can be.” The steak is really, ridiculously fatty – okay at first but daunting when trying to eat through 3/4 of a pound of it, even for three people.To our server’s credit, she did warn us that it’d be fatty – I just didn’t realize she meant it’d be as fat-laden as it was.

The corn on the side was a nice respite from the fatty steak even if it was cooked with lardo in it. I especially liked the kick from the red chili flakes – a spicy kick that lingers for quite a while, actually.

Let’s get down to brass tacks, shall we? Between the four small plates, the steak, a side, and one alcoholic beverage each, our bill came out to to $123 before tax and tip – not bloody expensive but certainly not cheap. Essentially, it’s the usual premium tacked on for the Momofuku dining experience, one you either enjoy or think is massively overhyped. My friends and I enjoyed our meal at Momofuku Má Pêche, the massive coronary in our future aside. The food is just short of great and the service was excellent. Now if they could just do something about their spartan decor, they might have a real winner.